While some people continue to believe that worldwide lockdowns are an effective tool to control the spread of respiratory disease, others believe that encouraging social contact to develop robust, natural herd immunity may be a better strategy. As this unsettled debate continues to rage among both scientists and policymakers, the negative consequences of restricting the healthy to remain at home are continuing to be discovered. Such consequences are pertinent to the debate, as any presumed benefits to renewed or continuing lockdowns need to be balanced against the known costs. One unforeseen consequence of our managing the pandemic through lockdowns is the birth of another pandemic, this one affecting children’s eyes and vision. The prevalence of myopia, or an inability to see distance objects clearly, has skyrocketed in young children over the last year. After optometrists noticed an alarming increase in the number of children needing corrective lenses, a study published by the American Medical Association found that myopia has doubled and in some places tripled among children aged 6-8 years[i]. Based on the pattern of its timing and comparisons with rates from previous years, the authors concluded the cause of these eye problems to be increased time spent indoors as a result of mandated home confinement. Ironic, that among the unforeseen consequences of a myopic policy forcing otherwise healthy children to remain indoors is, in fact, an increase in myopia.

Perhaps because it is so widespread and so easily remedied by corrective lenses, myopia has never been considered as disturbing a trend as perhaps it should be. It has been estimated that one-third of adults in the United States are afflicted with myopia[ii], to the extent that requiring eyeglasses to see is just considered a variant of normal. The fact that myopia runs in families, and therefore presumed to have a strong genetic component, only contributes to the fatalistic notion that there will be those who need glasses, those who will not, and no one can or should even be bothered to do anything about this. But why is no one concerned that fully one-third of people’s eyes don’t work normally? If a third of adults in our population required an adaptive device to walk correctly, because their legs for some reason didn’t work normally, people would be wondering about the cause of this widespread disability. The fact that myopia has tripled in children over the last year, clearly as the result of a lifestyle change, should underscore the fact that myopia is a consequence of our behavior, not some irremediable curse with which mother nature has seen fit to afflict one-third of humanity. 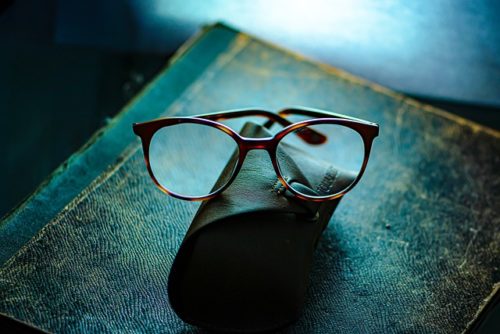 The pathogenetic basis of myopia is well known: the refractive errors accounting for the loss of far-vision result from a distortion of the normally spherical eye. In other words, the eye doesn’t develop into the proper shape required for its function.  Again, if a third of peoples’ feet weren’t developing into the proper shape required for them to walk without corrective footwear, this would undoubtedly be viewed as a far more glaring problem. Even though needing to wear glasses is a minor inconvenience when compared with some other forms of disability, what it reveals is that some aspect of our lifestyle is preventing our bodies from developing properly, which should be concerning to everyone. Even if some of us escape this consequence, and those who do not can have it easily fixed, the widespread mal-development of our eyes should be considered a canary-in-the-coalmine warning that our species is physically degenerating as a result of its lifestyle. What other physical disability has ever been met with such blithe acceptance?

The exact cause of myopia has not been conclusively shown, though recent epidemiological evidence combined with the lockdown phenomenon is pointing ever more clearly to the causative factor being time spent indoors. If spending too much time indoors does indeed turn out to be the cause of myopia, this would be very encouraging since it would mean the solution is simple, inexpensive, and available to all. The stereotypical myopic childhood has traditionally been the shy, intellectual type who reads too many books instead of playing with the other children, and for a long time it was believed that the failure of normal eye development resulted from too much near-focusing, i.e. reading too much. Because the spherical eye becomes elongated in myopia, and because the ciliary muscle that focuses the eye essentially encircles it near the lens, it was thought that excessive focusing caused hypertrophy of the ciliary muscle, which in turn constrained the developing eye, causing it to bulge backward as it grew. When myopia rates exploded in children after mandatory lockdowns, it was naturally assumed that increased screen viewing necessitated by remote schooling was to blame, possibly compounded by an increase in screen-based recreation as a consequence of their not being able to play outside, go anywhere, socialize normally, etc. But this theory, that excessive near-work is to blame for myopic vision, based of course on a stereotype that the kid who needs glasses is a bookish intellectual, had already been disproven even before the lockdowns began. Previous large-scale epidemiological studies found that children’s time spent engaging in near-work, like reading or focusing too close to a screen, had neither an effect on the incidence[iii] nor the progression[iv] of myopia. In other words, you don’t end up needing glasses from staring at a screen too long or reading too many books.

It doesn’t seem to matter what you do indoors, but simply that you are indoors. One thing that has been associated with myopia in children, which bears directly on the unwholesome practice of confining them indoors, is their serum vitamin D concentrations[v]. Several studies have now found that the kids who need glasses tend to be those with the lowest vitamin D levels, and one study even went so far as to demonstrate that it is not simply time spent outdoors, but vitamin D levels specifically that influence myopia rates[vi]. This remarkable study correlated serum vitamin D levels (independent of outdoor exposure) with the axial length of the eye, suggesting that vitamin D plays a crucial role in controlling the eye’s development. And now we’re seeing an increase in kids needing glasses after literally an entire year of their being stuck indoors? Unfortunately, increasing vitamin D has not been shown to reverse the progression of myopia once it begins, but the good news is that since the association is independent of actual sun exposure, supplementing vitamin D during this critical period of eye development may be able to help turn the tide in addressing this problem.

Since vitamin D also plays a role in maintaining a healthy immune system, it seems foolish to address the spread of an infectious disease by measures that quite obviously lead to lower vitamin D levels. Maybe closing all of those beaches last summer while praying desperately for a vaccine wasn’t the best thing to do, at least not in the long term. Because vitamin D is important to the health of everyone, not just developing children, it is more important than ever to monitor vitamin D levels in patients who may be working from home or otherwise confined. This seems obvious, but it is important also to keep in mind that supporting liver and kidney health can also play a role, as these organs function to convert vitamin D to its active form. Chronic liver disease and chronic kidney disease both have been associated with vitamin D deficiency[vii],[viii], so addressing imbalances in these two organs, or reducing the strain upon them by helping to minimize overall toxic burden, can also support both vision and immune health. There is a noted relationship between liver function and the eye – jaundice is often first evident in the sclera – and red, injected eyes are considered an indication for the herb Solidago, a powerful kidney tonic[ix] , attesting to the importance of addressing vision health holistically.