Guarding Against a Zinc-Copper Imbalance

With zinc supplementation on the rise – driven by an interest in immune support – it is important to keep in mind a potential downside of taking excess zinc which is copper deficiency resulting from a zinc-copper imbalance. Copper deficiency is relatively uncommon and is typically only seen in conjunction with genetic disorders of metabolism and certain malabsorption syndromes but it can also be induced by overly zealous zinc supplementation. When this occurs, it can create a zinc-copper imbalance in the body which can be very difficult to correct. Before prescribing supplemental zinc, it is crucial to understand the close relationship between zinc and copper in the body and why their intakes must be balanced and why it is necessary to guard against receiving an excess of either.

The close relationship between zinc and copper relates to their elemental similarity. Their atoms differ by only one proton meaning they are roughly the same size and each is found in the body predominantly in a divalent cationic state. It is frequently claimed that zinc and copper compete with one another for intestinal absorption. This is why an excess of one will create a deficiency of the other, but the truth is slightly more complicated. Zinc and copper each have their own unique transport proteins in the enterocytes of the small intestine – meaning they do not compete for the same transporter on the apical membrane. But because all heavy metals, even the essential ones, can become highly toxic in excessive amounts, their assimilation is tightly regulated by a two-phase process. First, the metals must be absorbed into the intestinal cells and then they are subject to a sort of intracellular quarantine before being released as needed into circulation. This provides an extra level of security against their toxicity. When excess zinc and copper are absorbed from dietary sources or supplementation, they are bound in the intestinal cells to a protein called metallothionein which renders them unusable to the body. Eventually, the enterocytes holding the excess minerals die and are replaced at which point the dead cells are sloughed off with their bound zinc and copper to be excreted in the feces. So, by altering metallothionein levels in the intestine the body can finely adjust how much of the absorbed zinc and copper makes it into the bloodstream independent of actual intake. The body increases metallothionein levels as a response to excessive heavy metal exposure and this is where the antagonism between copper and zinc becomes apparent. Metallothionein has a slightly higher affinity for copper than it does for zinc – possibly reflecting the fact that copper toxicity is ordinarily of greater concern to the body – but it is upregulated in response to an excess intake of either. In the case of excessive zinc supplementation, if the body’s true need for zinc is overshot and zinc begins to approach a toxic level, it will dramatically increase metallothionein levels resulting in the sequestration of necessary copper as well as excess zinc. The reverse can also occur whereby exposure to toxic levels of copper can create a zinc deficiency.

In other words, zinc supplementation only creates a copper deficiency through the body’s attempt to prevent zinc toxicity. One important lesson to take away from the above is that anything which increases metallothionein in the intestinal cells will decrease both copper and zinc availability. Metallothionein is used to protect the body against a number of ingested toxic metals, like cadmium for instance. So, not only can excess zinc lead to a copper deficiency and vice-versa but oral exposure to highly toxic heavy metals like cadmium can decrease the availability of both. If you’re trying to balance zinc and copper or correct a deficiency of either, it would be important to explore and address any form of heavy metal toxicity. It should also be considered that protocols to aid the detoxification of heavy metals may involve increasing metallothionein as it is one of the principal mechanisms of eliminating such toxins from the body. It may, therefore, be warranted to supplement the essential heavy metals throughout such protocols to prevent their deficiency. This would include both zinc and copper in addition to iron, manganese and molybdenum. The last of which is important to support detoxification anyway.

Once a zinc-copper imbalance has occurred, correcting it can be difficult. Zinc and copper are both heavy metals and are eliminated from the body relatively slowly. As long as levels of one remain excessive, metallothionein will remain elevated in the intestines to prevent their assimilation and thus, the body is unlikely to respond to oral supplementation. While the concern with taking an excess of supplemental zinc for immune support is potentially creating an imbalance favoring zinc and leading to copper deficiency, it is still a more common scenario for the opposite to occur – namely that a high-copper, low-zinc diet will create an intractable zinc deficiency. This situation can sometimes afflict people who have been on a long-term vegan diet and might explain why some former vegans have a very difficult time reintroducing animal foods. It may be accepted as a general rule that animal foods are much higher in zinc while plant foods are higher in copper. A balanced consumption of both types of food would therefore seem a good way to prevent a zinc-copper imbalance. Zinc deficiency is common worldwide due to a relative scarcity of animal foods in impoverished communities, but it can also occur with high copper intakes on a vegan diet. Tofu is notably high in copper as are many nuts and seeds, and very few plant foods provide a good source of bioavailable zinc. Potentially compounding the problem are the high phytate levels in whole grains which can decrease zinc absorption. If copper begins to accumulate in excess it essentially shuts down zinc absorption which can, in turn, precipitate a zinc deficiency. The cruel irony of this situation is that zinc is required for the synthesis of stomach acid necessary to digest the high-protein animal foods that provide the best sources of zinc. Someone hoping to reintroduce animal foods on a limited basis for health reasons may therefore find it difficult to tolerate them and see this rather as further evidence that animal foods are bad for their body. If copper levels become too elevated even oral zinc supplements will not correct the problem.

This is why it is better to prevent an imbalance from occurring in the first place. While zinc deficiency is surprisingly common, zinc excess is far rarer and usually occurs as a result of taking high supplemental doses for long periods. One case report describes frank copper deficiency ensuing as a result of taking around 150 milligrams of zinc daily for ten months[i]. Reports such as these have led many practitioners to become more cautious when prescribing zinc and many zinc supplements are reducing their dosages from 50 milligrams to the 35 milligram range. With many people now reaching for zinc to provide immune support it is important to remember that too much zinc can lead to severe chronic disease. Copper deficiency often begins to manifest itself as anemia that does not respond to iron supplements. It can also lead to neuropathies, demyelination of nerves, osteoporosis and, in fact, leucopenia, which would drastically compromise the immune system regardless of zinc intake. Copper deficiency anemia due to zinc excess may require intravenous copper administration to bypass its lack of assimilation in the gut. As powerful a tool as zinc is it should be treated with a healthy measure of respect and never abused as a more-is-better panacea.

On the other hand, neither should excessive caution prevent one from using supplemental zinc in appropriate doses. It is important to remember that under normal circumstances the body is quite efficient at keeping zinc and copper in balance. The absorption efficiency of either increases when its dietary intake decreases. This probably reflects an upregulation of the respective cellular transporters in response to each mineral’s availability in the diet. Evidence also suggests that zinc losses from urine and sweat decrease when dietary intakes are lower suggesting that the body is able to conserve these minerals when necessary and works actively to balance them in real time. Therefore, one need not be overly concerned with obsessively micromanaging intake levels of these minerals since the body seems quite capable of regulating them through its own mechanisms. It is only when supplemental zinc is given in large doses for extended periods of time that problems are likely to arise. 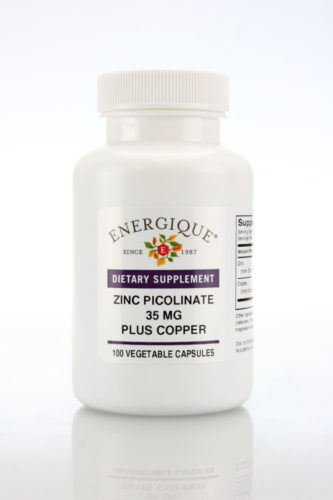 To address the potential for copper deficiency, a high-quality zinc supplement should contain small amounts of copper to help offset any decrease in copper availability. As mentioned above, this is less of an issue when taking lower doses of zinc on an intermittent basis for occasional immune support. It applies more to cases warranting chronic supplementation with higher doses such as might be indicated for skin health, prostate support, maintenance of joint health, gut mucosal support, the promotion of adequate wound healing or digestive support in people who may have become zinc deficient from a prolonged vegan diet. So, what is the proper ratio of zinc to copper to give in dietary supplements? It is not 1:1 as zinc is required by the body in far greater quantities than copper. An ideal ratio is not definitively known but it is easy to make a good guess. One might look to nature for an example. Oysters, which are among the best natural dietary sources of both zinc and copper, contain the two minerals in roughly a 20:1 ratio. Then again, humans are not oysters so it cannot be assumed that we too require a ratio of 20:1. A standard that is slowly being accepted for dietary supplements is 35:2. That is 2 milligrams of added copper per 35 milligram dose of zinc. This ratio was extrapolated simply by comparing the daily values that have been established for both minerals which, granted, may not reflect the body’s true needs in every situation but are still a very reasonable basis on which to reach a conclusion.

Webinar on Demand Now
Next Post:Webinar 1/21/21 Stress and Blues